Tom Shanahan set up the Irish College of TCM in 1983, as described on the previous page, which you should read first.

This page gives details of his qualifications, professional associations, background, on-going commitment to Acupuncture and Traditional Chinese Medicine at home and abroad.

These include the following: 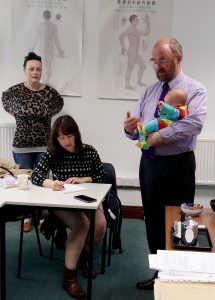 Tom teaching clinical students how to diagnose infants, in 2017.

Six years of formal Post-graduate training and certification in the specialism of Medical Qigong from Guangzhou University of TCM, China (2000 onwards)

Past President of the Professional Register of Traditional Chinese Medicine

Chairman of the Institute of Alternative Medicine

Member of the Irish Acupuncture Council

Former President and founding member of the Register of Chinese Herbal Medicine, UK

Member of the Register of Traditional Chinese Medicine, UK

Tom was born in Ireland but attended Public School and University in England and Spain. He is a graduate of both Oxford and Cambridge Universities. He is also a trained teacher with a number of formal teaching and educational qualifications, obtained from Cambridge University and London institutes. He is a Licentiate of the College of Preceptors and in addition to his MA (Oxon) holds degree equivalents in a variety of disciplines. He formerly lectured at Oxford University, in the Department of External Studies, on the topic The Theoretical Foundations of Traditional Chinese Medicine.

He was destined for a highly successful academic career – having been invited to accept a Head of Faculty post in Canada, before changing direction and undertaking a thorough and extensive education and training in the field of TCM.

His teaching and lecturing experience spans more than 45 years and extends to fields outside of medicine. He is a published author and has contributed to learned journals and publications on a variety of subjects as well as presenting scientific papers on Traditional Chinese Medicine at, for example, the World Congress Of Acupuncture and Traditional Chinese Medicine, held in the Palais de l’ UNESCO, Paris, in 1990, cosponsored by the World Health Organisation and the French Ministry of Health.

His on-going commitment to TCM

Tom continues to be a Clinical practitioner of TCM in its 3 main branches, considering this role to be pivotal, focusing upon the treatment of patients with utmost diligence, kindness and compassion.

His roles as the Director (Principal) of the College and as the Director of Clinical Training are also central. As the founder of the ICTCM he gives the College, and its students, his undivided attention, support and encouragement.

Underpinning and motivating each of these endeavours is an ongoing attempt to ensure that the true and valuable traditions and medical techniques of real Traditional Chinese Medicine are not diminished, adulterated, or lost. At a time when the maternal homeland of TCM is sometimes more interested in other things, Tom believes that the survival and spread of excellent quality Chinese Medicine may lie in the hands of people such as himself, who have knowledge, expertise and vast experience of Chinese Medicine and who, living as they do outside the motherland, are able to dedicate their working lives, as he has done, to the preservation and spread of the highest possible quality TCM Training to promote and ensure the emergence of “Superior Practitioners,” for the benefit, wellbeing and enhanced health of present and future patients.

It is his personal dedication to these goals, that defines the Mission Statement of the Irish College of TCM.

Supporting the continuance of real high quality TCM across the world

Tom also supports TCM in other ways.
He regularly attends TCM conferences across the world. For example, between 2004 and 2015 he represented Ireland at International Conferences in TCM in Nansha, Guangdong, China; Jinan, China; Guangzhou, China and Bangkok, Thailand. In 2016 he presented a paper at the WASMQ conference in Beijing.

During this time he also received invitations from Conference organisers in Italy, New Zealand, the USA and South Korea.

In January 2004 he was appointed as a Consulting Professor of TCM with the International Department of Guangzhou University of TCM. He is the first Irishman to be appointed to such a post, in recognition of his years of experience in, and commitment to, Chinese Medicine. In November 2011 he was pleased to accept an invitation to lecture at Guangzhou University of Chinese Medicine (GUCM). After this visit, Tom was honoured to receive a Visiting Professorship from GUCM, in 2012.

He is a Council Member of the Presiding Council of the World Academic Society for Medical Qigong (WASMQ). In 2007 he was elected to the prestigious post of Deputy Secretary General of WASMQ. He is also an executive member of the Academic Selection Committee for the latter Conference and is a Council Member and an Academic Advisor to the International Qigong Science Association (IQSA). He is the designated representative for Ireland for both WASMQ and the IQSA.

As a practitioner, teacher and life-long student of TCM he frequently gives talks and lectures on the subject, and has broadcast both on radio and television, as well as being a published author and contributing articles to newspapers, health guides and professional journals. 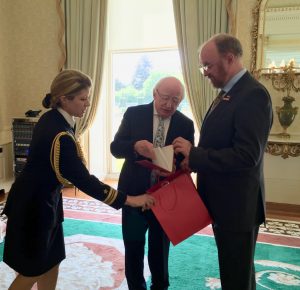 In January 2016 Prof Shanahan had great pleasure in accepting the position of Vice-chairman of a Specialist Committee looking into the role of Traditional Chinese Medicine in the provision of Palliative Care for Cancer.

In June 2016 he was honoured to attend a reception at Áras an Uachtaráin  in Dublin and to meet the President of Ireland Michael D Higgins, where the President graciously accepted the gift of one of Tom’s books on Chinese Medicine.

October 2016 saw a visit to South Korea for an International Symposium on Korean Medicine hosted by Busan University, which Tom was privileged to accept by invitation of the South Korean Ambassador to Ireland.

2017 events included a Qigong Conference in Rome and in 2018 he made a further visit to Guangzhou University of Chinese Medicine, combined with a Conference in Macao and a business trip to Hong Kong. Tom presented papers in both Rome and Macao.

International conference invitations for 2019 have already been received from Beijing and Japan.

Find out more about our Affiliates, friends and linked Associations.